The classification of Zemstvo post stamps used by Schmidt is close to the generally accepted in philately but possesses a number of peculiarities. This classification is following (trial stamps will be reviewed at the end).

Trial stamps are well known from nuts and bolts of philately as printed with two aims: to present to the customer to get his consent on the issue of the whole ordered circulation as well as to test the quality of printing. Therefore, the number of copies of trial stamps is minor. And they are regarded as black swan in philately.

Zemstvo trial stamps are known mainly by their broad variety. However, whereas trial stamps were issued in 64 Uyezds, there are no archive data indicating that municipal authorities really chose the design they considered satisfactory among proposed variants of images, combinations of colour, etc.

An attentive review of Zemstvo trial stamps shows their considerable inhomogeneity and, concerning part of them, puts you in doubt with regard to the appropriateness of their general appellation as «trial stamps».

Among «trial» stamps, the biggest number refers to the issues (obviously not postal ones) printed in many colours on different types of paper and sometimes with deliberately changed designs of stamp. They include Lochvitza «trials» corresponding to the stamps No. 49-55; the stamps of seven face values number over 170(!) «trial» colour variants; similar «trials» No. 56, 57 number «only» 30 variants for two face values. The same occurs among the stamps of Dneprovsky, Belebeyevsky and other Uyezds.

Intentional changes in design (for example, adding double carmine corners on Zolotonosha «trial» stamps) are often the case. The «trial» stamps of Berdyansky, Lebedyansky, and Starobelsky Uyezds post stamps include even those with design replaced by «negative»., Only background colour is printed in such «trials», and details having light colour on a normal stamp are printed dark, while dark details on the normal stamp was left unshaded in the «trial». Such monochromatic «negative» designs were printed in black, red, blue, etc., colours. Post offices in Permky Uyezd used monochromatic five-kopek stamps (blue and red ones, No. 5-11), however a 2 kopeck face value «trial» stamp with similar design exists in four (!) colours.

Obviously, there was no necessity for the post office in all these tricks and there is no evidence that these stamps had anything to do with postal service. Presently, it is probably impossible to find out real reasons for multiple issues of such stamps.

It is more realistic that the «trial» stamps with different colours, and furthermore with different furnishings of the design were intended for e.g. members of a municipal bodies as gifts. May be they also were resulted from business activity of printing houses that executed the orders of both municipal authorities and private persons, collectors who enriched their collections in this manner and wished to excel their colleagues in philately. As the stamps printed in small provincial printing houses are mentioned, this seems quite possible. For example, in Irbitsky Uyezd, in addition to monochromatic stamp No. 15 and corresponding multiple one-, two-, and three coloured «trial» stamps, «trials»” with improved design are known (the coat of arms and crown are more thoroughly depicted) in many combinations of colours as well as monochromatic stamps printed on paper of different colours.

In some cases, the difference between stamps used in postal offices and the «trial» stamps of the same kind is so feathered that practically they are not distinguishable, for example in the case of Belozersk stamps issued in 1902-1907. The Schmidt catalogue shows 17 post stamps (No. 52-68) and 18 «trial» stamps; both printed on white and yellow paper in such a broad colour variety that sometimes it is difficult to identify whether the regarded stamp is referred to the list of postal stamps or to the list of the «trial» stamps.

Whereas the version that these «trial» stamps were made anyhow for private persons can be considered probable, it turns out that there is no clear boundary between these «trial» stamps on the one hand, and reprints and reproductions on the other hand, which were also produced not for postal service. The terms mean that the trial stamps are issued before printing the main circulation and reprints – after. But in many cases the dates of stamp issue are not precisely known, particularly it refers to the trial stamps and reprints. In many cases it is hardly possible to separate trials from reprints, and even Schmidt wavered in this problem (in his monograph issued in 1932 he mentioned the reprints of No. 1 of the Khersonsky Uyezd, and in the 1934 catalogue he called these stamps trial).

We can believe that the most part of the issues discussed here were printed after the main printings according to the fantasies of people involved in the stamp issuing. If these people used the genuine stones remaining after printing, it did not seam difficult for them to change colours, make imprints on different paper, etc. And even to make new stones on the model of the issued stamps, giving them additional ornament.

Among these «trial» stamps there are stamps with a slight change in the design. So, for example, in the Shatsky Uyezd the stamps No. 13 – 17, 19 – 21 and 23 with slight changes in the design (three types of stars in an oval) were used. And «trial» stamps are known with other (also different) stars. Such production of «trial» stamps unlikely shows the search of a better design, since too insignificant detail was changed. Besides, the Zemstvo stamps quality requirements were always low. These «trials» could be either blanks for an abortive issue of post stamps (such cases are known (for example in Opochetsky Uyezd), or the result of the attempts to produce a variety of the circulated stamp, i.e. falsification. They might be the rudely made reproductions for collectors as well. 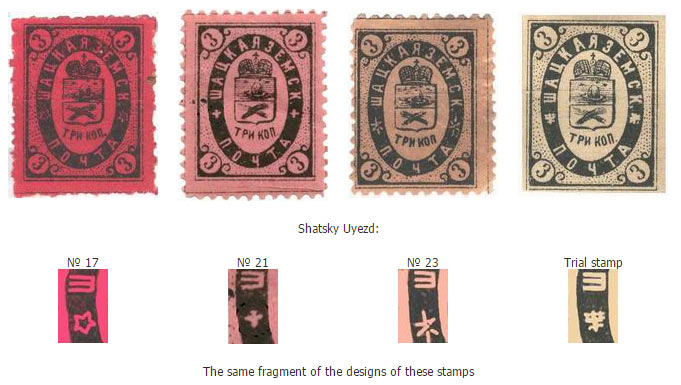 So there is a considerable group of stamps called «trial» stamps, but their designation was clearly non postal, and they did not play the role of really trial stamps (let’s here conditionally call them stamps «gift» stamps).

Anyhow, these stamps do not make the list of the Zemstvo «trial» stamps all-embracing. Reviewing the descriptions of the trial stamps by Schmidt, assumptions of their origin and correspondingly of their philatelic value may be made concerning different trials. We emphasize that these are just assumptions that may be argued but their verity is not proved.